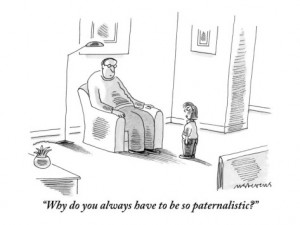 “We are too fat, we are too much in debt, and we save too little for the future.” Thus begins Sarah Conly’s Against Autonomy, in which she argues that if we truly care for people, we will support coercive paternalistic government policies to promote their own goals. Autonomy-based arguments against doing so don’t amount to much, because our so-called autonomy doesn’t amount to much. Conly draws on social psychology and behavioral economics to argue that we reason badly and make bad choices by our own lights. To help us overcome our biases, it is not enough to change the choice architecture so that it nudges us to act in ways that will help us to achieve our goals, as Cass Sunstein and Richard Thaler propose in their book, Nudge. The nudge policy allows people to work around the nudges and do as they please. Only coercive paternalism is truly effective.

In spite of Conly’s careful consideration of certain arguments against paternalism, I think her thesis suffers from several fatal flaws. Here I’ll address only three. One is the complete absence of the concept of individual rights from Conly’s book, an absence that affects her view of what counts as respect for people and which laws count as coercive. She argues that while coercive paternalism doesn’t show respect for “people’s ability to choose well for themselves,” it does show respect “for the value of human lives by trying to help people … achieve their own ultimate goals” (8, 9). Leaving them “free” to make self-destructive choices is inhumane, not respectful. But this equates respect with concern about welfare. Those who reject coercive paternalism as a violation of people’s liberty rights do so because they recognize that forcing people to act or not act in certain ways is disrespectful of their agency, regardless of how badly they exercise their agency. Respectful help is not coercive, and coercive paternalism is, well, coercive. If you “help” me to attain my goal of quitting smoking by throwing my cigarettes into a trash can over my protests, you do not respect me. Even an enthusiastic defender of paternalistic public policies should be able to see this. A fortiori, a government that forces me to stop smoking, and threatens to punish me if I don’t, does not respect me. (Conly agrees that smokers should not be punished, but as I argue below, should her proposal of banning the manufacture of cigarettes be adopted, we will almost inevitably end up with punishment of smokers.)

Just as Conly does not appreciate the rights- and respect-based argument against government paternalism, she does not recognize that every government action is not coercive. For example, she argues that laws or judicial decisions that strike down or reverse unjust laws, such as laws that forbid homosexuality or interracial marriage, promote our liberty even though they “force us to do things that don’t reflect our present values” (62, italics mine). But striking down or reversing laws that violate our right to engage in peaceful voluntary actions is freeing us to engage in those actions, if we so choose, not forcing us to do anything. They are cases of recognizing and protecting rights that were heretofore violated. If some people are offended by this new liberty, well, this is a free country.… They may not only feel offended, they may even freely speak out against it. Forcing us to act in certain ways, and respecting our rights by striking down rights-violating laws, are two different, and opposed, things.

The second problem is Conly’s quick dismissal of slippery slope arguments against paternalism. She rightly notes that slippery slope arguments are often fallacious. But they are not fallacious when there really is a psychological or political slippery slope, and they are especially noteworthy when the proposed law is objectionable on other grounds, as paternalistic laws are. The anti-paternalist points out that paternalist legislation tends to put us on a slippery slope to ever more laws that infringe our liberty, often without any offsetting benefits. The War on Drugs is a case in point. At first only drug dealers were targeted, but soon it was anyone caught with even a tiny amount of marijuana (Radley Balko, Rise of the Warrior Cop, 2013). What followed was the highest incarceration rate in the Western world, with police with military gear breaking down doors in the hope of catching people growing or consuming pot in their own homes, often killing the family dog or even the unarmed and pot-less occupants of the house.

Conly makes two counterarguments. One is that if a slippery slope argument is good, then it has force against all laws, even criminal laws that everyone would accept are needed. But this doesn’t follow. Since we need laws that enable us to live together peacefully and productively, the right response to the real danger of slippery slopes is that we should advocate only those laws that enable us to do this: laws that stop us from swinging our fists where other people’s noses begin, and laws that define and protect property rights. Conly’s second counterargument is that the drug case can’t be generalized, because drugs were prohibited for perfectionist or moral reasons, not paternalistic reasons, and that this is why the war on them has continued in spite of its irrationality and destructiveness (119-122). Conly is mistaken in thinking that paternalism was no part of the justification for the War on Drugs (see Douglas Husak, Legalize This! The Case for Decriminalizing Drugs), but even if she is right, why suppose that a wholly paternalistic ban would not have had the same outcome? Conly seems to think that if legislators can see that the outcome of some proposed legislation is bad, including for the very people it is supposed to help, they will not pass it. And this is the third problem with Conly’s case for paternalism: she seems to think that legislation is crafted by impartial, rational individuals who examine all the pros and cons of a proposed measure before deciding what to do about it. However, as both public choice economics (http://www.econlib.org/library/Enc/PublicChoice.html) and experience show, legislators often act to further their own interests, electoral, monetary, or ideological. So by the time everyone in the game has put in an amendment that serves their interests, what we get is a juggernaut of a bill that, often, no one has read in its entirety.

The Lacey Act is one of the most egregious examples of this. This act was originally meant to prevent Americans from poaching elephants in Kenya, but it has slipped down the slippery slope to become a law to obey every “footling wildlife regulation in the world” on pain of years of imprisonment, absence of mens rea no defense (http://www.economist.com/node/16640389). One of these felonies is importing lobster from the Honduras in plastic bags instead of cardboard boxes. Or take smoking, which Conly wants banned. In order to avoid the widespread fear and resentment that punishing smokers would cause, thereby undercutting the rationale for the ban, Conly proposes banning cigarette production instead. Unfortunately, we don’t have to wait for the proposed ban in order to guess what the result will be. High cigarette taxes in some states have already led to gangs engaged in the black-market business of cigarette smuggling from low-tax states to high-tax states like New York (http://taxfoundation.org/article/cigarette-taxes-and-cigarette-smuggling-state-2013-0 ), and the Contraband Cigarette Trafficking Act of 1978 already punishes smuggling with a five-year prison sentence. Banning the production of cigarettes would turn the domestic smuggling operation into an international one, with even more dangerous cigarette gangs and black markets with stronger and, perhaps, adulterated cigarettes. And just as in the case of illicit drugs, the state would soon be arresting not only those involved in smuggling and selling, but also individual smokers, and in addition wreaking havoc on the exporting countries. Given these facts, there is no reason to think that anti-smoking laws cannot lead to life sentences – for our own health, of course. Today there are so many federal crimes that it’s hard even to count them, and all of us are probably guilty of several without our awareness (http://www.economist.com/node/16636027) This is the face of, in the words of James Buchanan, “politics without romance” (“A Sketch of Positive Public Choice Theory and its Normative Implications”).

It might be thought that if I’m right, then our choice is between ruination at the state’s hands and ruination at our own hands. But not so. People have always known how to find help when they cannot reach their goals on their own, whether this be quitting smoking, drinking, gambling, or excessive spending, by using precommitment devices, or joining voluntary groups. But what private alternative is there to seat belts and prescription drug laws, which undoubtedly do save lives? Since medical insurance companies and pharmaceutical companies don’t want to kill patients, in the absence of the said laws, they would have contracted with pharmacies to dispense certain drugs only with prescriptions. Similarly, car and life insurance companies would have induced customers to wear seat belts by offering them lower premiums.

Conly’s argument for coercive paternalism ignores these possibilities, as well as the two most important arguments against paternalism: coercing individuals into acting in certain ways, even if in the service of their own aims, violates their rights and shows a lack of respect for their agency; and when such laws fail to achieve the desired effect, they typically lead to more coercive laws and more severe punishments, with the result that the bad effects greatly outweigh the good effects. Had Conly considered the abundant evidence that power corrupts and that too much power makes even a democratic government autocratic, she would have argued against paternalism instead of against liberty.

This entry was posted in the law. Bookmark the permalink.