The Moral Meaning of Kidney Sales 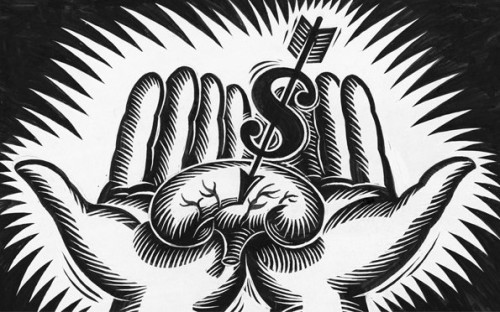 The Moral Meaning of Kidney Sales

There is a very simple economic argument in favor of allowing sales of kidneys and other organs. People are simply not willing to donate the kidneys others need to live. There are about 100,000 people on the kidney waitlist in the US, and most will not get kidneys. However, people are willing to sell kidneys, if given the chance. Others are willing to buy them, if given the chance. So, we have a supply and demand curve for the kidney market, and an implicit market equilibrium price. However, because the US government forbids kidney sales, the government thereby sets the legal price of a kidney at zero, far below the market price. Not surprisingly, we have a shortage—the quantity demanded greatly exceeds the quantify supplied. In this case, the government-mandated shortage literally kills people.

Aside from economists, most people fail to find this argument convincing. They have a wide range of complaints and objections to organ markets.  However, many of their complaints are at best about contingent features of kidney markets, features that could be removed through various regulations. For instance, some worry that if organ sales were legal, would-be sellers would rush in without proper awareness of the risks involved. But there’s an easy fix: just require would-be sellers to get a license; they may only sell after passing a “sellers’ ed” exam showing they understand what they’re in for. Others worry that the desperately poor will sell their kidneys at too low a price and thus be subject to exploitation, or that they will be so desperate they cannot consent to selling. But there are a few fixes for these worries. The government could set a minimum legal price, or forbid anyone who makes less than, say, $25,000 a year from selling kidneys. Others say that a kidney market would price the poor out of the market. But we could solve that by having the government provide means-tested kidney vouchers for the very poor. And so on. I don’t happen to favor many of these regulations—I think the costs would exceed the benefits—but the point is just that these kinds of worries are at best about contingent features of the market that can be removed.

However, even once we remove these kinds of objections, most people regard kidneys markets as inherently wrong, because they find such markets repugnant or repulsive. Markets in kidneys, they say, put a price on the human body. But the human body is not the kind of thing that should be for sale. Human beings have a dignity, not a price. To buy and sell kidneys would violate the meaning of the gift relationship, or would somehow show disrespect for the human body.

I have to admit, I find such objections bizarre. Prohibiting kidney sales literally kills people. How can concerns for expressing respect for the sanctity of life lead us to endorse laws that kill people? If we find such markets repulsive, so what? I find dermatological extractions disgusting, but that doesn’t cause me to want to prohibit the practice.

These arguments seem to rely on a highly contingent view of what putting a price on something expresses. As anthropologists and sociologists have documented at length, contemporary westerners happen to see money as profane, impersonal, and utilitarian. But westerners did not always think that way, and many people around the world do not. The Merina people of Madagascar do not attach such stigma to money. On the contrary, they believe a husband ought to pay his wife after sex; failure to do so is disrespectful. They do not see gifts of money as thoughtless or impersonal, and, according to sociologist Viviana Zelizer, neither did Americans in the late 1800s. Contemporary Americans happen to think putting a price on something communicates that the thing is merely a commodity with no intrinsic value, but they do not have to think that way.

Indeed, perhaps they shouldn’t. We needn’t take the meaning we attach to certain actions, words, or behaviors for granted. For instance, suppose we learned that giving people the middle finger somehow cured them of disease. We shouldn’t refuse to give people the finger for fear of expressing contempt, but rather change the norms governing the meaning of the middle finger. The Fore tribe of Papa New Guinea discovered that their practice of eating their dead, which they intended as a means of expressing respect, caused a fatal disease, so they revised the social norms governing what it takes to express respect for the dead. Why can’t we similarly revise the norms governing what it means to sell parts of the body? It seems easy to imagine a world in which people regard kidneys sales not as expressing disrespect for the human body, but instead as expressing respect (precisely because such markets would save lives). Just as we don’t think it expresses disrespect to commodify, say, philosophy lectures, we needn’t think it expressed disrespect to commodify kidneys.

This entry was posted in bioethics, the law. Bookmark the permalink.

2 responses to “The Moral Meaning of Kidney Sales”